Two stylish unmarked mechanical pencils asked for pencil blog time. Here they are. Each is circa 1890. Both propel/repel their leads via tip twist mechanisms. Each is just under 4 inches in length. 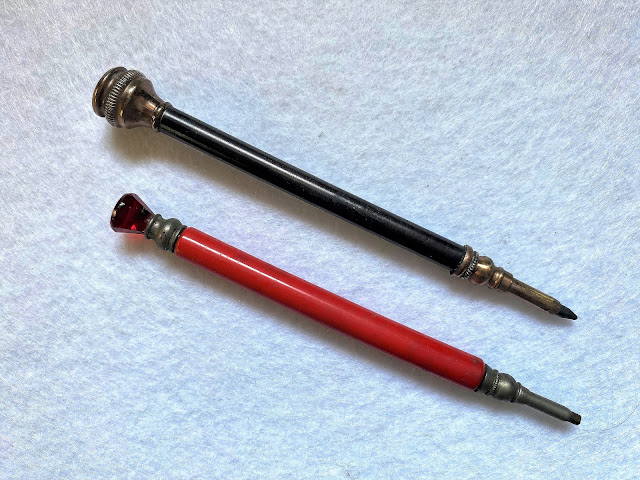 Posted by Joe Nemecek at 1:20 AM No comments:

George Rowney & Co. of Britain produced this pack of propelling pencils. Circa 1915. All are marked Model 1252 "Diana". The pencils featured lead colors of brown, blue, red, yellow, and green. The odd duck yellow piece with brown cap is likely the black lead version of the model line. All are 4 1/4 inches long in length. 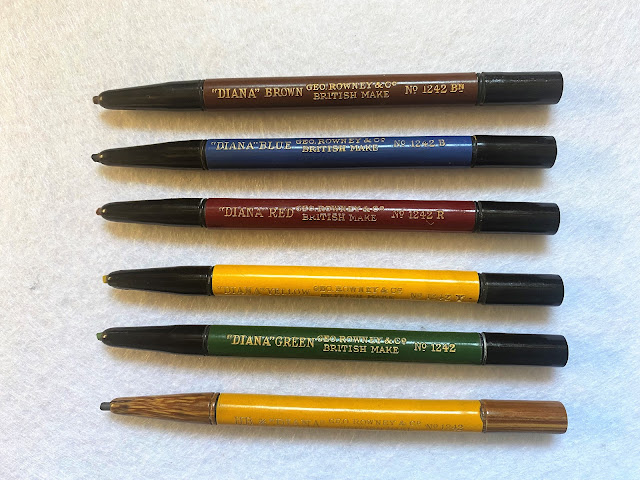 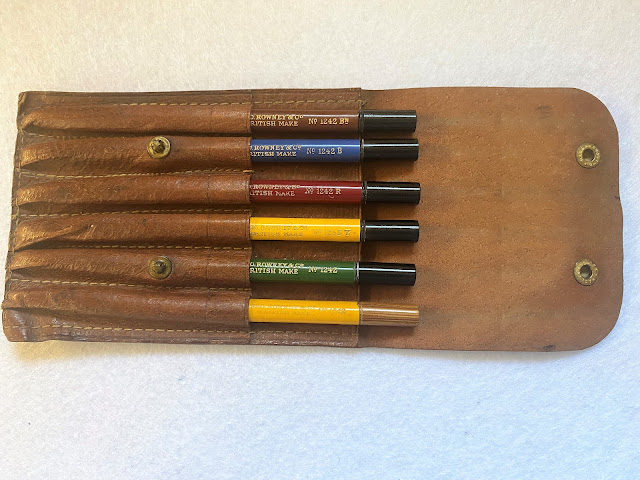 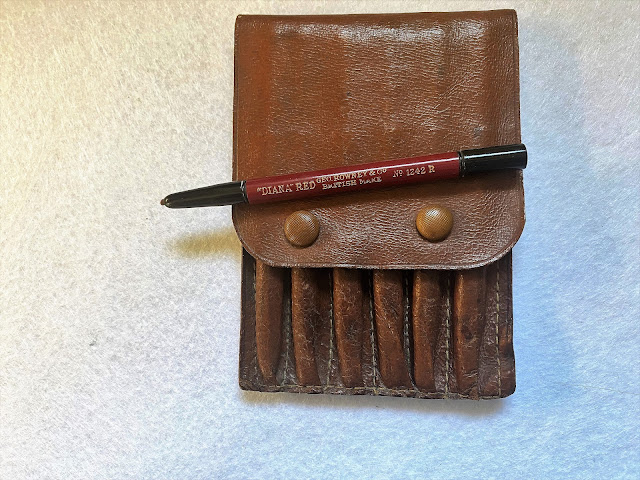 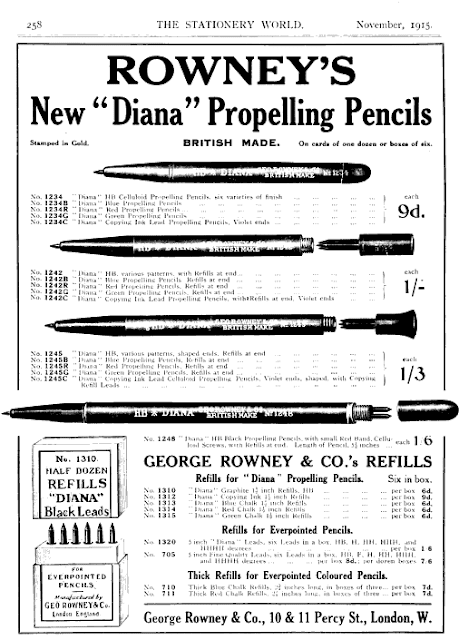 Posted by Joe Nemecek at 1:16 PM No comments: 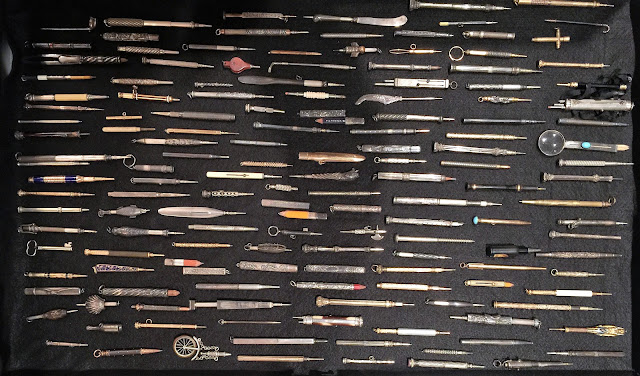 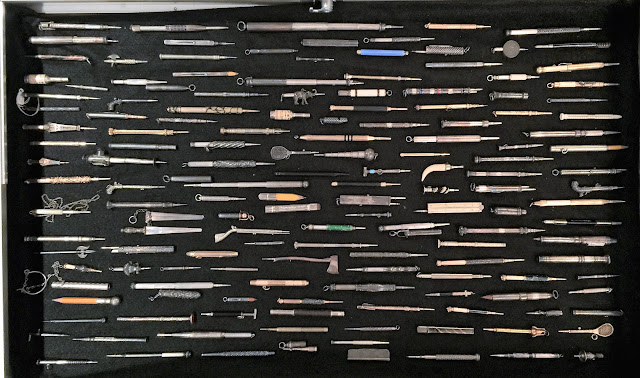 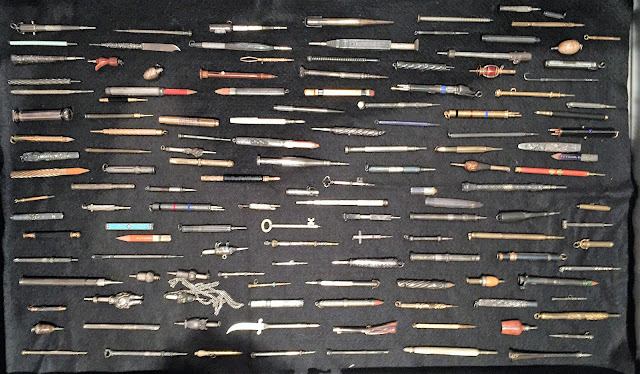 Posted by Joe Nemecek at 9:59 AM No comments:

This Sampson Mordan figural mechanical pencil is styled as a Christmas season celebratory cracker - noisemaker. The body material is silver. The working end of the pencil is deployed via the magic pencil system - pull out the ring and as if by magic the writing mechanism simultaneously pops out the other end. The inscribed Registration Lozenge dates the piece to 1879.  Without the ring assembly, the device measures  1 15/16 inches closed and  3 1/4 inches ready for work.

Wikipedia further explains: "Christmas crackers are festive table decorations that make a snapping sound when pulled open, and often contain a small gift, paper hat and a joke. They are part of Christmas celebrations in the United Kingdom, Ireland and Commonwealth countries such as Australia, Canada, New Zealand and South Africa.

"A cracker consists of a segmented cardboard tube wrapped in a brightly decorated twist of paper with a prize in the centre, making it resemble an oversized sweet-wrapper. The cracker is pulled apart by two people, each holding an outer chamber, causing the cracker to split unevenly and leaving one person holding the central chamber and prize. The split is accompanied by a mild bang or snapping sound produced by the effect of friction on a shock-sensitive, chemically impregnated card strip (similar to that used in a cap gun)." 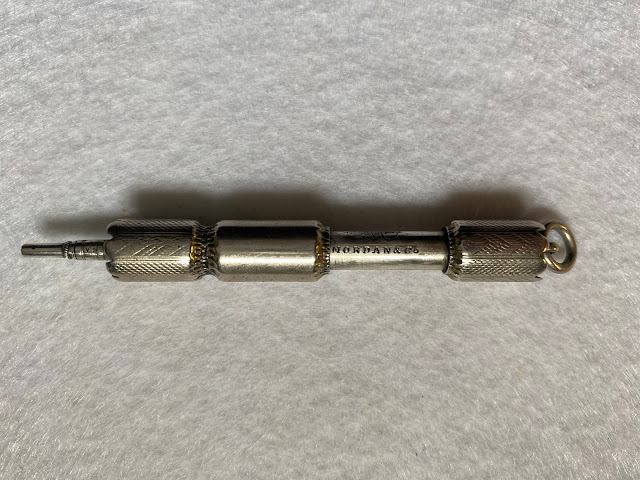 Posted by Joe Nemecek at 3:48 PM No comments: